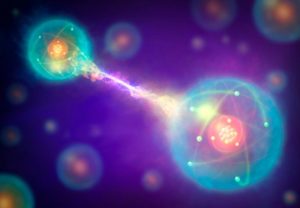 Entanglement is the weirdest quantum phenomenon – so weird that even Einstein, who remember gave us warped space-time, time travel and black holes – didn’t believe it calling it ‘spooky action at a distance’. It is when interacting quantum particles maintain an instantaneous connection even after they have been separated by huge distance so that measurements performed on one instantaneously influences the state of the other. Nevertheless, quantum entanglement has been demonstrated in many experimental systems and is the basis of quantum teleportation, whereby particles and codes can be instantly transported across arbitrary distances. For example, researchers recently teleported a photon 143km between the two Canary Islands of La Palma and Tenerife.

Entanglement already plays a role in quantum biology, as the proposed mechanisms by which birds such as robins – see here.  However, a new paper from Vlatko Vedral’s group at the University of Oxford claims of the successful entanglement of bacteria with photons—particles of light. The paper written by Chiara Marletto and published in October in the Journal of Physics Communications, describes experiments in which the team trapped several hundred photosynthetic green sulfur bacteria between two mirrors in a cavity of just a few hundred nanometers. They then shone light into the cavity potentially allowing the photons to become entangled with the photosynthetic pigment molecules.

Analysis of the data suggested that the bacteria’s photosynthetic systems did indeed becoming entangled with the light inside the cavity: the emitted light. The key signature of entanglement was something called Rabi splitting. Although this can be caused by non-entangled systems, it seems much more likely that in this case the data is best explained by quantum entanglement.

The result is a fantastic combination of experiment and theory. Are the bacteria really entangled with light? Probably. In a sense, it would be a surprise if they weren’t as we know that entanglement is a fundamental feature of the quantum world. But the entanglement did survive for hundreds of femtoseconds which suggests that quantum states are feasible in living cells. The experimental setup may even be a cool way of probing the interaction of quantum coherence and noise in living systems.