Life is the most extraordinary phenomenon in the known universe; but how does it work? Even in this age of cloning and synthetic biology, the remarkable truth remains: nobody has ever made anything living entirely out of dead material. Life remains the only way to make life. Are we missing a vital ingredient in its creation?

Like Richard Dawkins’ The Selfish Gene, which provided a new perspective on how evolution works, Life on the Edge alters our understanding of life’s dynamics. Bringing together first-hand experience of science at the cutting edge with unparalleled gifts of exposition and explanation, Jim Al-Khalili and Johnjoe Macfadden reveal the hitherto missing ingredient to be quantum mechanics and the strange phenomena that lie at the heart of this most mysterious of sciences. Drawing on recent ground-breaking experiments around the world, they show how photosynthesis relies on subatomic particles existing in many places at once, while inside enzymes, those workhorses of life that make every molecule within our cells, particles vanish from one point in space and instantly materialize in another.

Each chapter in Life on the Edge opens with an engaging example that illustrates one of life’s puzzles – How do migrating birds know where to go? How do we really smell the scent of a rose? How do our genes manage to copy themselves with such precision? – and then reveals how quantum mechanics delivers its answer. Guiding the reader through the maze of rapidly unfolding discovery, Al-Khalili and McFadden communicate vividly the excitement of this explosive new field of quantum biology, with its potentially revolutionary applications, and also offer insights into the biggest puzzle of all: what is life? As they brilliantly demonstrate here, life lives on the quantum edge.

“Life on the Edge’ gives the clearest account I’ve ever read of the possible ways in which the very small events of the quantum world can affect the world of middle-sized living creatures like us. With great vividness and clarity it shows how our world is tinged, even saturated, with the weirdness of the quantum.” (Philip Pullman)

“Hugely ambitious … the skill of the writing provides the uplift to keep us aloft as we fly through the strange and spectacular terra incognita of genuinely new science.” (Tom Whipple The Times)

“Coherence is just one of the complex phenomena that Jim Al-Khalili and Johnjoe McFadden set out to teach the reader. They succeed by using delightfully revealing analogies and similes, some borrowed from their prior work, that make slippery concepts sit still for study.” (The Economist)

“This thrilling book represents an overview of a field that barely exists. Its argument is that there really is life, at a subatomic level, where indescribably small events have powerful effects on human and animal behaviour. ” (Nicholas Blincoe, The Daily Telegraph)

“… as Jim Al-Khalili and Johnjoe McFadden show in their groundbreaking book, evidence is accumulating that life uses quantum effects for processes ranging from bird navigation and plant photosynthesis to the way enzymes carry out biochemical reactions.” (Clive Cookson, The Financial Times)

““Life on the Edge” is a fascinating and thought-provoking book that combines solid science, reasonable extrapolation from the known into the unknown, and plausible speculation to give an accessible overview of a revolutionary transformation in our understanding of the living world. I will certainly look at robins with more respect in future.” (John Gribbin, The Wall Street Journal)

“This illuminating account of an important new field is a wonderfully educative read.” (A C Grayling)

Hot news!!! Life on the Edge has been selected as one of the ‘Books of the Year’ for 2014 by The Economist, The Financial Times and The Independent!

US edition of Life on the Edge now published! Even hotter news!!!! Life on the Edge has been nominated for thhe 2015 Royal Society Winton Prize!!! Adventures in the Anthropocene, by Gaia Vince

We didn’t win but we had a terrific evening. Here’s a video of the event: and here’s all the shortlisted authors

and a nice collection of video animations for each book and Life on the Edge has just been nominated for 2015 PhysicsWorld Book of the Year! and Life on the Edge made it to the Wall Street Journal’s best non-fiction books for 2015 list! 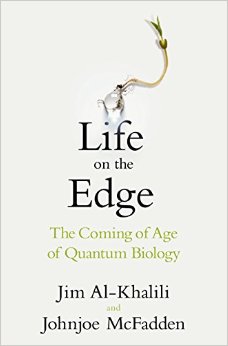